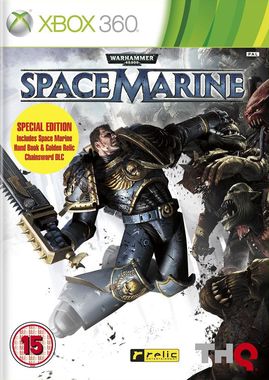 Space Marine is a fast-paced third person action-shooter from Relic Games allowing players to don the armor of one of the emperor's chosen in a battle for the very survival of humanity.

Exclusive 24 page full colour Space Marine booklet & Redeem code* to download a golden version of the iconic Chainsword weapon for use in multiplayer games... be the envy of your enemies.

In Warhammer 40,000: Space Marine you are Captain Titus of the Ultramarines, humanity’s last hope for survival in a war-ridden future. Step into the armour of this superhuman warrior and use a lethal combination of deadly weapons to crush overwhelming alien forces. Fight against the savage Orks and the unholy forces of Chaos in a brutally violent world based on the richest science fiction fantasy ever created.