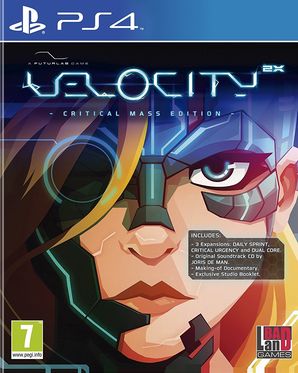 Velocity 2X: Critical Mass Edition casts players as Lt. Kai Tana, the pilot of the prototype Quarp Jet. Nefarious tactics send Kai Tana and her teleporting Quarp Jet to a galaxy ruled by the evil Vokh, a tyrannical race of aliens who believe they have a divine right to rule the universe. They've created an armada by enslaving other races and seek to make humanity their next conquest. Kai Tana must free the enslaved races and use her Quarp Jet to stop the Vokh before they can discover its secrets and invade Earth.