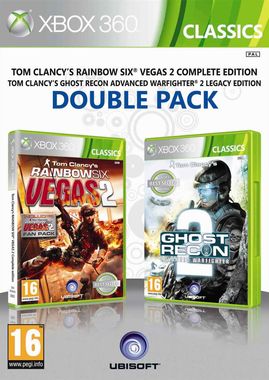 Ghost Recon: Advanced Warfighter 2:
It's 2014, and the soldier of the future returns to encounter a new and more imminent threat along the recently completed wall on the U.S./Mexico border. The Ghosts are more powerful with an upgraded Integrated Warfighter System (IWS) but will have only 72 hours to assess the threat and stop the rebels from reaching U.S. soil. With a border that's 1,900 miles long and an enemy that doesn't play by the rules, this is a job for the U.S. military's most elite fighting unit. This is a job for the Ghosts.

Rainbow Six: Vegas 2:
While Logan Keller is in pursuit of Irina Morales in Mexico, Six has ordered your team to Vegas. There, terrorist mastermind Alvarez Cabrero is hatching a scheme to bring Sin City to its knees - and it's up to your team alone to stop him from turning Vegas into a devastated inferno.