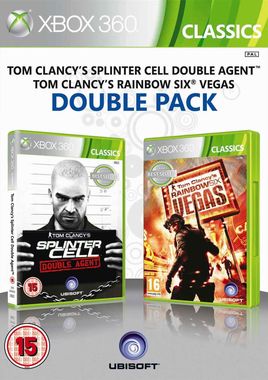 Rainbow Six: Vegas:
Las Vegas is burning while the world watches. International terrorist Irena Morales has amassed an army of mercenaries to besiege America's playground, but her true agenda remains a mystery. Hero Logan Keller and his team have one night to return order to the heart of chaos before Irena achieves her ultimate objective. What they discover will not only change Rainbow itself, but could also tip the balance of power firmly in favor of the terrorists.

Splinter Cell: Double Agent:
Experience the relentless tension and gut-wrenching dilemmas of life as a double agent. Lie. Kill. Sabotage. Betray. All to protect the innocent. How far will you go to gain the enemy's trust? As covert operative Sam Fisher, you must infiltrate a vicious terrorist group and destroy it from within. You'll need to carefully weigh the consequences of your actions. Kill too many terrorists and you'll blow your cover. Hesitate and millions will die. Do whatever it takes to complete your mission, but get out alive.