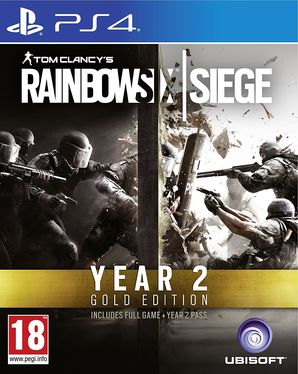 Please note: Year 2 Pass is provided via a DLC code and may not be present/valid when purchased pre-owned.

Rainbow Six Siege is the latest installment of the acclaimed first-person shooter franchise developed by the renowned Ubisoft Montreal studio for the new generation of consoles and PC. In November 2016, Rainbow Six Siege went beyond 10 Million players worldwide, underlining the success of the R6 story. The game is now supported by one of the most active and engaged community of players. Inspired by the reality of counter terrorist operatives across the world, Rainbow Six Siege invites players to master the art of destruction. Intense close quarter confrontations, high lethality, tactics, team play, and explosive action are at the center of the experience. The multiplayer gameplay of Rainbow Six Siege sets a new bar for intense firefights and expert strategy in the rich legacy of past Rainbow Six games. With its regular major updates called "Operations", Rainbow Six Siege evolves and grows over time, with new maps, new playable characters ("Operators"), new customization items and more. With the Year 2 Gold Edition enjoy the full game experience with the standard game and the Year 2 Pass, featuring exclusive customization items, VIP services, and an instant early-access to the 8 upcoming operators of the Year 2 each new operation. The Year 2 Pass will be updated over time, with new items automatically added to your inventory.