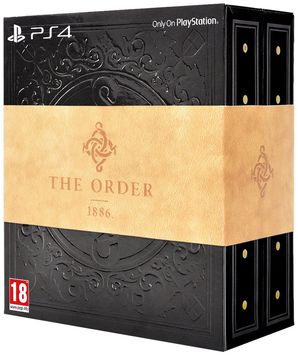 Seek out the ultimate version of The Order: 1886 with the Collector's Edition, containing the following:

The Order: 1886 introduces players to a unique vision of Victorian-Era London where Man uses advanced technology to battle a powerful and ancient foe. As Galahad, a member of an elite order of Knights, join a centuries-old war against a powerful threat that will determine the course of history forever in this intense third-person action-adventure shooter, available exclusively on the PS4 system.

Where history and myth collide – Assume the role of Galahad, one of the most experienced Knights of The Order, and enter a unique vision of Victorian-Era London that fuses real historical figures and events with new twists on familiar myths and legends.

Danger on all fronts – Conflict rages in this 19th century London between enemies new and old. Rebels declare all-out war on The Order and the police state they represent, while mankind’s true enemy, a powerful and ancient foe known as Half-breeds grows in strength and numbers in and around the city.

Advanced technology – Wield cutting-edge weapons and gadgets like the Arc Gun, Thermite Rifle, and Monocular, as you struggle to maintain peace and order amidst the growing civil unrest and Half-breed threat against humankind.

Filmic vision – The Order: 1886 transports players into the stunningly realistic and re-imagined Neo-Victorian London, replicating the nuances of actual motion picture cameras and lenses for a more immersive and believable presentation.

Seamless narrative experience – Full performance capture for characters and scenes, combined with seamless transitions between action and story sequences, work together to bring the rich narrative, rife with conspiracy and intrigue, to life.