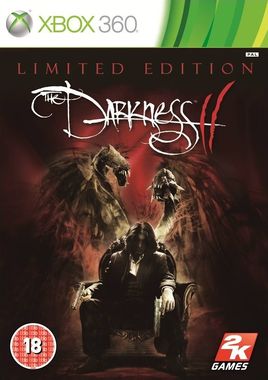 The Darkness II is the sequel to the critically-acclaimed 2007 release, The Darkness, and features an original story by acclaimed comic writer Paul Jenkins.
It’s been two years since Jackie Estacado, now Don of the Franchetti crime family, used The Darkness to kill the men responsible for his girlfriend’s murder. He’s been unable to shake the memory of Jenny’s death since bottling up his supernatural power and now The Darkness wants out.
A sudden, unprovoked attack on Jackie’s life heralds the start of a full-scale mob war which has clearly been orchestrated by some outside force. The botched attempt opens the door for The Darkness to re-emerge, and sets Jackie on a journey to hell and worse as he unravels the mystery behind the attack and the motivations of The Darkness itself.
Key Features:
• Quad-Wielding Chaos: Slash, grab, and throw objects and enemies with the Demon Arms while simultaneously firing weapons, adding a new dimension to the FPS category
Kill The Lights: Vicious, flesh-eviscerating supernatural powers only manifest in the absence of light so use or create shadows for a strategic advantage.
Gripping Interactive Storytelling: Intense and personal story written exclusively for the game by acclaimed comic book author Paul Jenkins whose credits also include The Incredible Hulk, Wolverine and Hellblazer.
Distinctive Graphic-Noir Style: Graphic novel shading and colour combined with the dramatic lighting of film noir make it feel as if you’re playing a graphic novel
Based on the comic book series created by Top Cow.
• Travel across the largest, most detailed maps, which are built in engine for multi player to date.