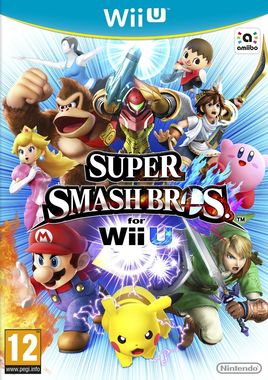 Please Note: Nintendo Wii U titles are not compatible with standard Wii consoles

In Super Smash Bros. multiplayer games, characters from all Nintendo universes meet up in Nintendo locales to duke it out. Bring together any combination of characters and revel in the ensuing chaos that we have come to associate with the game. An action-packed fighting game, Super Smash Bros.features a ridiculous number of characters that have appeared on Nintendo platforms, from Mario to Link to Pikachu to the Wii Fit Trainer! As they square off in famous locales drawn from the rich history of Nintendo, literally anything can happen in Super Smash Bros. - and usually does. With limitless customising options, items and weapons that boggle the mind and a wealth of modes, Super Smash Bros. has truly infinite replayability. Use your chosen character’s unique attacks and special moves to damage your opponent, then hit ‘em with a smash attack to send them flying off the stage! The higher your opponent’s damage – represented as a percentage – the farther they’ll fly when launched, so pummel away until you see them steaming, then unleash your strongest smash attack and watch your target skyrocket off the stage. Take on nearby challengers in local multiplayer, or bring the battle to faraway friends and foes in online matches.

Famous names from favourite Nintendo franchises and guest characters come together in a high-definition fighter filled with spectacular action. With unique modes, online multiplayer, the ability to customise your fighter and the series’ biggest roster of playable fighters ever, Super Smash Bros. for Wii U is truly a clash for the ages. Mega Man, Little Mac, PAC-MAN and more new challengers join the longest roll call of famous fighters the Super Smash Bros. series has ever seen. You can even take on these gaming greats yourself as your Mii character – become a Sword Fighter, Gunner or Brawler and see how you stack up in a scrap! Whoever you choose, customise their special moves and equipment to make them your own. Collect equipment during gameplay and equip them to strike the perfect balance of attack, defence and speed, or maximise one attribute to suit your personal play style. Special moves can be collected and customised too, enabling you to craft your perfect fighter to bring into battle. The Wii U game offers more stages, with more variety, than any game in the series. There is now an expanded version of the original Battlefield stage named Big Battlefield. The Great Cave Offensive, based on the underground labyrinth found in Kirby Super Star, challenges players to avoid potentially lethal danger zones – or throw their opponents into them. The Jungle Hijinxs stage, based on Donkey Kong Country Returns, features dual-plane battles with a foreground and background, and blast barrels that shoot players from front to back and vice versa. After launch, a new Miiverse stage will feature players’ posts from Miiverse, where posts will appear in-game to cheer on the fighters.