Super Smash Bros with GameCube Controller Adapter for Wii U 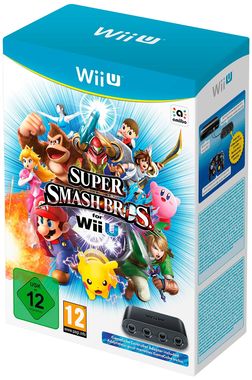 In Super Smash Bros. multiplayer games, characters from all Nintendo universes meet up in Nintendo locales to duke it out. Bring together any combination of characters and revel in the ensuing chaos that we have come to associate with the game. An action-packed fighting game, Super Smash Bros. features a ridiculous number of characters that have appeared on Nintendo platforms, from Mario to Link to Pikachu to the Wii Fit Trainer! As they square off in famous locales drawn from the rich history of Nintendo, literally anything can happen in Super Smash Bros. - and usually does. With limitless customising options, items and weapons that boggle the mind and a wealth of modes, Super Smash Bros. has truly infinite replayability. Use your chosen character’s unique attacks and special moves to damage your opponent, then hit ‘em with a smash attack to send them flying off the stage! The higher your opponent’s damage – represented as a percentage – the farther they’ll fly when launched, so pummel away until you see them steaming, then unleash your strongest smash attack and watch your target skyrocket off the stage. Take on nearby challengers in local multiplayer, or bring the battle to faraway friends and foes in online matches.