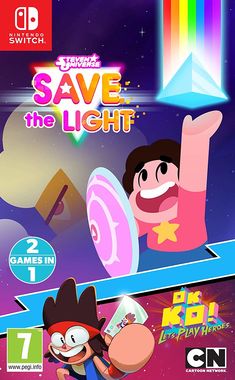 Two Games in One Pack - Steven Universe: Save the Light & OK K.O.! Let's Play Heroes Combo Pack
Steven Universe: Save the Light:
Join Steven and the Crystal Gems on their biggest quest yet! A mysterious new Homeworld Gem has stolen the Prism, a powerful weapon that can create an entire army from light - and she's already started destroying Beach City. Only you and your team can battle back to save the light (and the world) in this hybrid RPG based on the hit Cartoon Network show.
OK K.O.! Let's Play Heroes:
Ready to be a (pint-sized) hero? So is K.O. - because he's finally getting his very own Pow Card! BUT WAIT, Evil Lord Boxman has reset all the heroes' card levels back to zero. Help K.O. battle his way through a bunch of Boxmore robots, help him save the day with his Lakewood heroes and unlock new Power Moves and abilities.
K.O. is finally ready to be the hero he's dreamed of becoming... but only with your help.