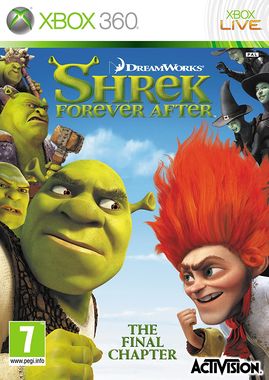 Longing for the days when he was a "real ogre", Shrek signs a deal with Rumpelstiltskin that throws the whole of the land of Far Far Away into a twisted alternative dimension. Now Shrek and his friends are being hunted and only true love (and some bad guy bashing) can save the day.

Shrek and Fiona take on the evil Rumpelstiltskin
Puss In Boots makes a return appearance in game and film
Can Shrek and Donkey bring back the real Far Far Away?

The whole family can join in with this co-operative four-player adventure, with a player each taking control of Shrek, Fiona, Puss In Boots and Donkey. Each character has their own unique skills but only by co-operating (or switching characters if you're playing on your own) will you win the day.

You'll soon be battling across two different realities, as the clever dimension-shifting puzzles make the most of each character's growing set of new powers. You can upgrade their abilities even more as you play, until you're powerful enough to take on Rumpelstiltskin and his most dangerous allies.
Key Features

* Fairytale Adventure: Relieve Shrek's latest cinematic adventure with an action-packed adventure across two different realities.
* Four Amigos: Play as any of the four main characters - Shrek, Fiona, Donkey and Puss In Boots - each with their own special abilities and moves.
* Family Fun: Play the game on your own by switching characters at any time or play with friends and family where everyone can take a role in the four player co-op mode.
* Levelling Up: Collect coins to buy new skills and upgrades for each character, from Donkey's megaphone attack to Fiona's disco ball move.
* Secret Worlds: Hunt for secret items and upgrades or level up your character enough and you can replay the game with extra puzzles and areas.