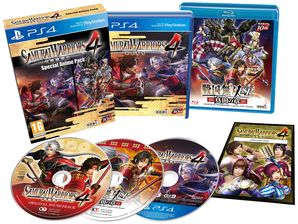 Since its original announcement in 2010, fans have been clamoring for information about SAMURAI WARRIORS 4. Now a new chapter of the saga unfolds with more than 55 playable warriors to choose from, devastating new attacks and exciting new modes creating an entirely new SAMURAI WARRIORS experience in stunning HD resolutions. Samurai Warriors is a title based on historical figures and events of the Warring States era of Japan. Much like Dynasty Warriors it follows historical events (battles, alliances, heroic deeds and deaths) and was originally an educational history tactical action game. The player makes strategic decisions on where to go and what to do based on dynamically changing real-time battle situations. This year marks the 10th year anniversary of the franchise that counts more than 34 million copies sold worldwide in its history. Samurai Warriors in the past has followed a character driven story mode model. In the fourth iteration though that changes, and the player follows the forces that the playable characters are part of. The story is divided into a number of chapters, one on Kyushu, another on Tohoku, and so on. In each of these chapters the main character and main force differs. By clearing certain chapters, other chapters will be unlocked (like the final unification themed chapter), and the story slowly unfolds.