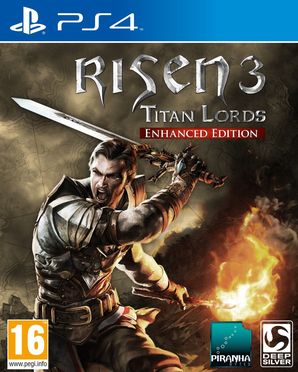 The world has been abandoned by its gods and is scarred from the rampage of the Titans. Humanity is struggling to regain strength and rally its forces. You, however, have more pressing concerns: your own life has been shattered and you must set off to reclaim what is lost amidst the darkness that is spreading throughout the world. Who knows, maybe you'll even save the world at the same time? Three threads of destiny lie before you. Three ways to rise up against the Titans and regain your soul. Which path to take?

The choice is yours. Risen 3: Titan Lords - Enhanced Edition on PlayStation 4 is a must have experience for all fans of gritty atmosphere, adventure and of course: exploration! Including all previously released content and featuring an upgraded graphics engine which delivers the handcrafted living and breathing world of Risen 3: Titan Lords in more detail than ever before, there's never been a better time to rise up and join the fight! The enhanced edition also includes previously released DLC:

Of course the game will also support the PS4 functionalities such as Remote Play, Streaming, Recording and Share Play.