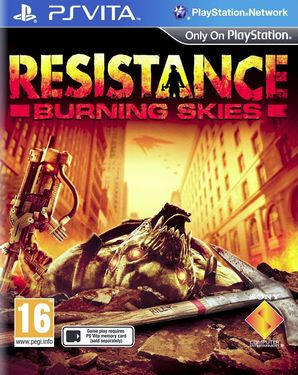 You are the Resistance on PlayStation Vita.

Set in a brutal, alternate 1950s universe, the Chimera attack on America has just begun. New Jersey firefighter Tom Riley, responds to a routine 911 call and comes face-to-face with the brutal Chimera in the initial days of their invasion on the east Coast of the US. He is separated from his wife and daughter and takes up arms against the Chimera to find them.
Being a firefighter, Riley can never stand idly by when people are in peril and there are several moments in the game where the player will be faced with situations where they can perform selfless acts of bravery in order to rescue people from the Chimeran hoard.