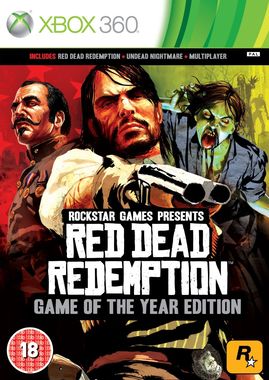 Experience an epic journey across the dying West

When federal agents threaten his family, former outlaw John Marston is forced to pick up his guns and hunt down the gang of criminals he once called friends. Winner of over 160 Game of the Year awards, experience Marston's journey across the sprawling expanses of the American West and Mexico as he fights to bury his blood-stained past and seek a new future for himself and his family. Red Dead Redemption Game of the Year Edition also features Undead Nightmare, the companion single-player story that turns the stunning world of Red Dead Redemption upside down as a mysterious plague transforms the West into an apocalyptic fight for survival against the zombie horde. Red Dead Redemption: Game Of The Year Edition comes packed with a complete suite of multiplayer modes including Free Roam, Co-Op, online Poker and Liar's Dice, Deathmatch and Undead Overrun survival mode.

Red Dead Redemption: Game Of The Year Edition will include the full, original Red Dead Redemption game; all free and paid downloadable content packs released to date, including the wildly popular Undead Nightmare single- and multiplayer offerings; and all bonus content.