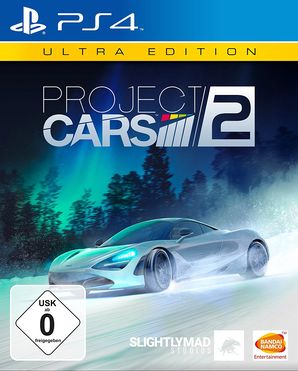 Please note: Additional content is provided via DLC code and may not be present/valid when purchased pre-owned.

Project CARS 2 is the next evolution in the award-winning racing series, featuring the most iconic cars under the most thrilling of conditions to deliver the "Ultimate Driver Journey" experience and adrenaline rush. Created by gamers, tested by world-class racing drivers, and the definitive choice of e-Sports pros - Project CARS 2 brings together the essence of real racing in the most beautiful, authentically crafted, and technically advanced racing game on the planet.

Project CARS 2 has it all - from GT to touring cars to endurance prototypes and exotic hypercars - delivering the full spectrum of motorsport racing with complete freedom to choose what and where to drive. Anytime. Anywhere.

Project CARS 2 fans looking for something even more exceptional from the world's most technically-advanced and beautiful racing game can now choose the Ultra Edition.

ULTRA EDITION This represents the most exclusive Project CARS edition ever created, and is an absolute must have for all Project CARS 2 fans.

The Project CARS 2 game will arrive in an exclusively designed, premium-packaged Steelbook case, the world's most sought-after collectable packaging

Honda's 2&4 Concept Car-get a feel for the future with this 13,000rpm collaboration between automotive and motorcycle design that screams performance

The Esport Live VIP Pass: Present this pass to any Slightly Mad Studios, or Bandai Namco staff member at Project CARS Esports live events anywhere in the world, and you will be treated to the full benefits that come from being a Project CARS VIP. Meet the team, jump to the front of the queue, or maybe even pick up some free swag!

The Project Cars 2 Art Book: A beautifully crafted book that takes you behind the scenes to reveal how the raw excitement of the racing world has been brought to life in the virtual realm. Featuring exclusive images taken throughout the development process, the 200-page book demonstrates the immense attention to detail that is the hallmark of the game, whilst showcasing the stunning new cars and true-to-life locations that make this the world's premiere motorsports game

The Season Pass: Project CARS 2 will be fully-supported post-launch with new, bold additional content featuring dozens of cars, as well as many tracks that will enhance and extend the overall experience. All these additional contents will be available to Season Pass holders the instant they are released at no charge

*This content is not available for purchase, and only available to Season Pass holders and/or Ultra Edition owners.

The McLaren 720S Sketchbook: Take a unique journey through the development of this ground-breaking supercar. Exclusively created in partnership with the design team from McLaren, the book lifts the covers on the making of the 720S, including never-before-seen early sketches and models, clays and renders, and guides you all the way through to the final production of McLaren's new supercar