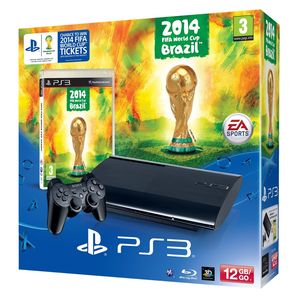 EA SPORTS 2014 FIFA World Cup Brazil + 12GB PS3
The only officially licensed videogame will let fans experience all the fun, excitement, and drama of football's greatest event. Featuring the deepest set of game modes ever in an EA SPORTS tournament title, all new gameplay innovations and improvements, and a rich presentation that captures the color and vibrancy of Brazil, EA SPORTS 2014 FIFA World Cup will put fans in control of their nation's fate. EA SPORTS 2014 FIFA World Cup Brazil features multiple innovations and improvements to the award-winning gameplay of EA SPORTS FIFA 14, putting players in control of their nation's fate.
With 203 national teams, 7,469 players, 19 officially licensed managers, and 21 new stadiums including all 12 authentic stadiums from Brazil, the 2014 FIFA World Cup comes to life with more detail and authenticity than ever before. Feel the support of a nation with all-new crowd scenes including banners, flags, and seat cards in the stadium, and from Live City events in all corners of the globe. Score a goal with England and see fans react live from Trafalgar Square, or have Germany bury the winning penalty and see fans erupt at Brandenburg Gate in Berlin
PlayStation 3 12GB
The redesigned new smaller, lighter PlayStation 3 packs all the gaming fun you’d expect from PlayStation but in a brand new case! By redesigning the internal design architecture and removing the disc-fed tray for a sliding top-loading disk cover, the PS3 Super Slim is reduced in size by up to 25% compared to the current Slim PS3.
Packing 12GB of internal Flash Memory, you'll have plenty of space to save games so you can continue where you left off! But if you find space getting tight, then you can always upgrade the Hard Drive size later on.
The PS3 Slim 12GB is more than a games console; it’s a home entertainment system that allows you to play Blu-Ray Discs, DVD’s, Music CD’s and watch TV through the BBC, ITV and Channel 4 iPlayers*.
What's in the box?