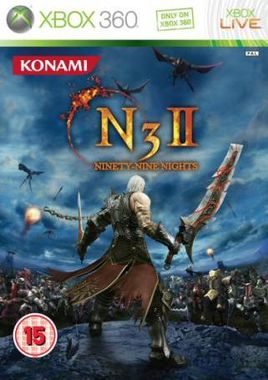 In a mystical world of miracles and magic, humans co-exist alongside many other races including the elves, goblins, and ogres. But when the “Lord of the Night” suddenly appears, in a mere 3 months the fertile fields of the land are reduced to scorched earth. Before long, Orphea, the sacred land to the north, is besieged by the Army of the Night. Amidst the roar of battle, one man thunderously bursts through the ranks of a legion like a bolt of lightning – he is “Galen,” the ultimate warrior. Alone, he storms forward as he lays waste to the dark forces, letting nothing stop him in his path to Orphea Castle. Galen must battle through the hordes of enemies that await him and this onslaught escalates with imposing monstrous creatures that join the fray. Centering on “the inheritance of life,” a new battle between light and dark begins!

* Encounter Massive Epic Battles: Staying true to its predecessor, Ninety-Nine Nights II will pit players against hundreds of enemies on screen for some of the most prolific ‘Hack & Slash’ gameplay to date!
* Enjoy Dramatic Visual Upgrades: Improved graphical presentation on the Xbox 360 featuring more enemies on screen, over-the-top destruction (Orb Attack), and uncompromised levels of violence including a blood camera system.
* Select from a Multitude of Fighting Styles and Weaponry: Campaign with various characters, each equipped with customizable weaponry/­accessories allowing for enhanced combo attacks and features that progressively change enemy battles.
* Form Alliances in Online Co-Op: Combat relentless enemies with a friend in fully supported online Co-Op play for 2 players via Xbox LIVE.