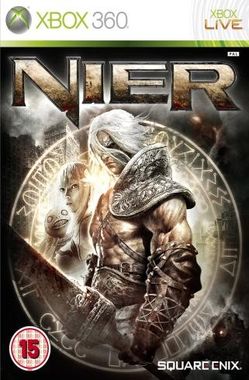 Nothing is as it seems as players are kept guessing from beginning to end by elaborate plotlines and cliff-hangers that reveal a complex reality hidden behind the illusion. Jump into the title role of the unyielding Nier as he begins his desperate quest to discover a cure for his daughter, Yonah, who is stricken with the deadly Black Scrawl disease. Armed with a powerful set of magical abilities as well as mighty swords and armor, Nier will do battle alongside a set of formidable allies against waves of dark enemies and giant bosses to discover the truth about the disease, his daughter and himself.
Features

* Unbelievable Story Twists and Reveals: Immerse in an amazingly intricate storyline set in a world plagued by human anguish, buried secrets and a ravaging disease. With plot twists hiding around every corner, Nier's story needs to be seen to be believed.
* RPG Gameplay Injected With Action-Packed Combat: Battle ferocious and mysterious enemies by combining proven RPG-style gameplay, such as magic, character development and faithful allies, with action-focused explosive swordplay and combat.
* Powerful Magical Abilities: When his sword isn't enough, Nier can call on a remarkable array of stylish and powerful spells to augment his combat moves and overcome adversaries. As players progress, upgraded spells will help defeat ever-more-deadly enemies.
* Brutal Combat Moves: Face off against evil creatures and unleash brutal combat moves along with devastating combo attacks. Unlock an arsenal of devastating weapons, each with its own design and attack style.
* Formidable Allies: Travel with a dynamic party of allies and do battle against monstrous giants as a powerful and united party.
* An Imaginitive and Stunning World: Travel across an unforgettable world filled with varied landscapes featuring the hauntingly familiar remains of modern society.