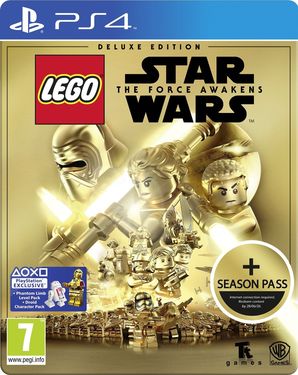 The Force is strong with this one… Pre-order the Deluxe Edition now and gain access to the main game and season pass content. The LEGO Star Wars: The Force Awakens Season Pass includes new playable levels, characters and vehicles.
Also included is early access to The Empire Strikes Back Character Pack, enabling you to bring your favourite Bounty Hunters and Hoth-equipped Rebels to LEGO Star Wars: The Force Awakens. This epic character pack includes Luke Skywalker, Han Solo, and Princess Leia in cold weather gear, the cybernetic Lobot and the Ugnaughts of Cloud City, as well as the deadly bounty hunters Bossk, Dengar, and Boba Fett in his original concept art white armour.

The No. 1 LEGO videogame franchise triumphantly returns with a fun-filled, humorous journey based on the blockbuster Star Wars film.

LEGO Star Wars: The Force Awakens also introduces Multi-Builds and Blaster Battles to the LEGO videogame universe. With Multi-Builds, use available LEGO bricks to open up new paths, then break them apart and re-build them again to open up another, and another. During Blaster Battles, use your surroundings as cover to stand against the First Order.