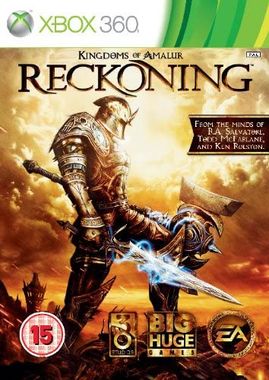 Kingdoms Of Amalur: Reckoning is an open-world action role-playing game set in Amalur, a mysterious and magical new fantasy world created by New York Times bestselling author R. A. Salvatore. Brought to life visually through the trademark style of renowned artist and Spawn creator Todd McFarlane, Reckoning brings a new level of visual style and visceral action combat to the RPG genre. The game is being developed under the leadership of Ken Rolston, lead designer of the critically acclaimed RPGs Elder Scrolls III: Morrowind and Elder Scrolls IV: Oblivion.

Kingdoms Of Amalur: Reckoning combines intense third-person action combat with deep exploration, expansive character development and customization, and immersive storytelling in an extraordinarily detailed fantasy universe. Gamers begin their journey when they miraculously rise from the dead, wielding dangerous new magic capable of changing the very Fate of Amalur. Thrust into a brutal war between multiple races, factions, and alliances, players vie for the secrets of their immortality and the ancient evil that threatens to consume the world.

The lore of Kingdoms Of Amalur: Reckoning spans an epic course of 10,000 years of history created by R. A. Salvatore. Kingdoms Of Amalur: Reckoning captures a moment in this history, the tale of a singular hero capable of reshaping the fate of the world of Amalur. Every building, tree, and creature has a clear and defined history within this immersive world filled with extraordinary landscapes, mysterious cities, colorful characters, and fantastic creatures inspired by the legendary art style of Todd McFarlane.