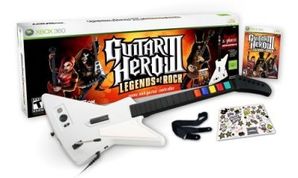 Guitar Hero III: Legends of Rock continues to build on Guitar Hero's successful easy to play, but difficult to master gameplay mechanic to take the franchise to a whole new level. With master tracks from legendary bands like Sex Pistols, Guns N' Roses, Rolling Stones, Metallica, and Pearl Jam, along with original music composed specifically for the game by iconic guitarists Slash and Tom Morello, Guitar Hero III: Legends of Rock sports the greatest soundtrack to ever find its way into a videogame. Vastly improved graphics immerse gamers into their rock arenas and heighten their visual experience while the Gibson guitar controllers allow the players to channel their inner guitar gods. The arcade-inspired Battle Mode, expanded Co-Op Career and Boss Battles add depth and extend gameplay for countless hours of shred time.

Featuring over 70% master recordings, spanning over 40 years of music across many rock genres, Guitar Hero fans have the opportunity to shred to one of the greatest compilations of music ever. Adding to the track list are some of the most legendary European anthems with a vast array of downloadable content post-launch. From Metallica to Muse and Rolling Stones to Rage Against the Machine, Guitar Hero III: Legends of Rock offers up a truly legendary set list.

Multiple tracks that can only be found in the game include guitar icons Slash and Tom Morello contributing original guitar riffs for their boss battles. Also, the Sex Pistols re-entered the studio for the first time in 30 years to re-record "Anarchy in the U.K." providing Guitar Hero III: Legends of Rock an original recording not available anywhere else. Additionally, Living Colour re-recorded their Grammy Award winning "Cult of Personality" adding a solo that left legendary guitarist Vernon Reid grunting.