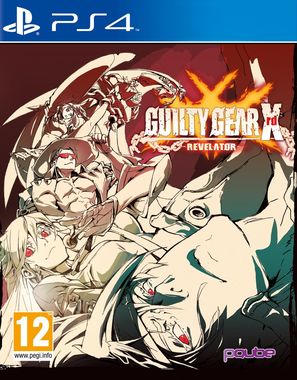 Guilty Gear Xrd -REVELATOR- is the latest entry in the long running 2D fighting series and features amazing 3D visuals, gorgeous animation, fast and intense battles, excellent netplay and a fully animated story mode. After the discovery of magic, humankind began using it to create weapons, ultimately birthing the biological weapons called GEAR. The GEARs eventually rebelled against their masters. Thus began the Crusades, a 100-year war to determine the fate of the mankind. In the distant future, humans stand victorious in a world ravaged by war, but the threat of non-humans still looms and tensions run high. It is in this place in time that Ramlethal Valentine declared war on the world and all its inhabitants. After confronting Ramlethal and uncovering a sinister plot by a group called the Conclave, Sol Badguy, Ky Kiske and the others have to deal with the fallout of this event. What happened to their friend Elphelt? Who was truly behind it all? …and what is the mysterious 'That Man' up to?