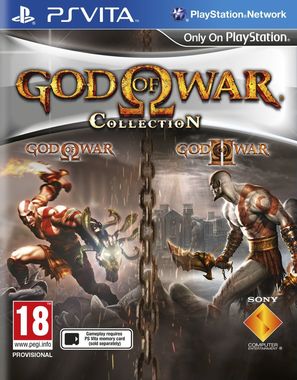 God of War Collection brings the nonstop action of God of War and God of War II to the PlayStationVita system for the first time ever! In God of War Collection, experience the brutal world of ancient Greece as the legendary Spartan Kratos seeks revenge on Ares, the God of War, and tries to accomplish what no mortal has ever done… alter the course of Fate itself.

In God of War, the dark brutal world of Greek mythology comes to life before your eyes. As you take the role of Kratos, a story unfolds that take the player through explosive, aggressive gameplay fused with traps, stunts and story driven puzzles. Featuring an hour of cinematic sequences and a deep combat system, God of War will take the player through a one-of-a-kind action-packed Greek mythology adventure.

God of War II continues the saga of Kratos, a mortal warrior betrayed by the Gods and forced to crawl from the arms of death to exact revenge on his betrayer - Zeus himself. The story picks up where players left off. Sitting atop his throne on Olympus, Kratos, the once mortal warrior has become a threat far worse than his predecessor Ares, had ever been. Kratos' journey brings him to the very edge of the Earth, facing countless beasts, monsters, and horrors from his previous life, all bent on preventing him from reaching his goal. But this is Kratos, and his defiance is filled with such arrogance and contempt that all of the Ancient World still trembles at his name: Kratos, the God of War.