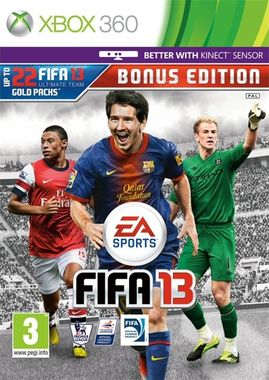 Kick-off with FIFA 13 and compete with the world's football elite as you battle for possession, each and every goal and mastery of the beautiful game. FIFA 13 is the latest instalment of the world's most successful football video game franchise, with over 100 million copies sold.

FIFA 13 features all the drama and unpre­dic­ta­bility of soccer with an unparalleled level of realism through new features and improvements. Attacking Intelligence is the most sophisticated artificial intelligence yet. Complete Dribbling gives you the ability to be more creative and precise with the ball for dangerous attacks. 1st Touch Control means that perfect touches every time are a thing of the past and that skill and control have never been so important.

The Player Impact Engine has been improved adding a new dimension to game play. In FIFA 13 you will use dummy runs, utilise the size and strength of your players to apply pressure and take advantage of your opponent's mistakes.

Lionel Messi, Wayne Rooney and the world's greatest players are at your disposal as you take part in individual games or in dozens of national leagues such as the Barclays Premier League, La Liga and Serie A. You can battle as one of over 50 international teams for the greatest prize of them all; the FIFA World Cup.

Join the EA SPORTS Football Club and play online in a community of millions of fans. Manage your squad through trading and auctions as you seek to create the perfect football team and gain rewards and status.