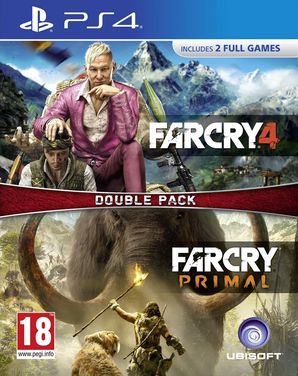 Built from the legendary DNA of its award-winning predecessor, delivers the most expansive and immersive Far Cry experience ever in an entirely new and massive open world, with integrated drop-in­/drop-out open world co-op play.

Hidden in the towering Himalayas lies Kyrat, a country steeped in tradition and violence. You are Ajay Ghale. Traveling to Kyrat to fulfill your mother’s dying wish, you find yourself caught up in a civil war to overthrow the oppressive regime of dictator Pagan Min. Explore and navigate this vast open world, where danger and unpre­dic­ta­bility lurk around every corner. Here, every decision counts, and every second is a story. Welcome to Kyrat.

The game is set in 10,000 BC. It was the Stone Age, where humans began to use stones to create tools for their daily life, and a time where humans face numerous challenges to survive, and encounter conflicts with other humans and nature. Players play as a hunter named Takkar, who is stranded in Oros, a former ice-covered valley.

The game is set in place called Oros, which is an open world filled with wildlife such as mammoths and sabertooth tigers. As the game is set in ancient times, the traditional gunplay featured in the series was removed, and players can only get access to melee weapons like spears, clubs, axes, and short-ranged weapons like bows. These weapons can be crafted with materials scavenged in the world. Players are also tasked to hunt for food and learn to create fire. Besides facing natural predators, the players are also tasked to defeat other tribes exist in the world.