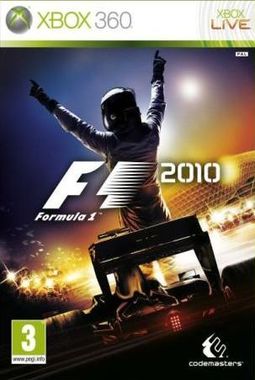 F1 2010 is the first multi-format, high definition Formula One videogame from Codemasters. Complete with all the official drivers, teams and circuits from the 2010 FIA Formula One World Championship, F1 2010 will immerse players in the glamour and exhilaration of the world’s most exciting motorsport, on and off the circuit.

F1 2010 will deliver an unrivalled Formula One experience that put players into the heart of the world’s most exciting sport, powered by cutting edge graphics, advanced physics systems and integrated network play.

• All the cars, all the stars. Fully licensed, F1 2010 features all the drivers and teams set to contest the 2010 FIA Formula One World Championship, including Formula One Drivers’ World Champions Jenson Button, Lewis Hamilton, Fernando Alonso and Michael Schumacher.

• Every circuit, beautifully realised. Race wheel to wheel on all 19 of the 2010 tracks, each modelled with exceptional attention to detail and jaw-dropping visuals.

• Be the driver, live the life. There is more to being a Formula One driver than being the fastest person on track and F1 2010 is the first game to allow players to experience the exclusive world of F1 like never before.

• Build a career. Whether players wish to work their way up from the bottom, switching teams as they go, or build a dynasty with their chosen team, gamers can fully realise their aspirations in F1 2010’s extensive and challenging career mode.

• The full pit lane, featuring each team in their various stages of strategy, becomes home to tense and exciting moments of drama as the drivers and crew work to return their car to the race as fast as possible.

For the first time in almost a decade a new Formula 1 game is appearing on all the home consoles and PC, as Codemasters gets ready to make their mark on the sport. Using the same graphics technology as Colin McRae: DiRT 2 and Race Driver: GRID, this is set to be the best F1 game ever.