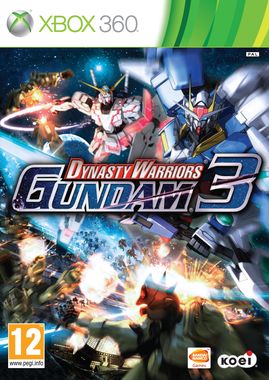 Dynasty Warriors: Gundam 3 represents the next generation of futuristic mecha action with graphical and gameplay additions, bringing authenticity and astounding improvements to the series.

Dynasty Warriors: Gundam 3 also features a number of gameplay additions to the series, including 3 brand new featured systems, including the Partner Strike, Emergency Dash and Recovery Gauge Systems, which will bring a new level of tactical engagement to the series. Partner Strike System will enable the player to summon partner characters to the battlefield to assist at crucial moments affecting your characters current melee engagement or possibly the overall battlefield conditions for your army. Emergency Dash System will allow players to execute new cancel and evasion moves negating enemy attacks. This system will bring a new level to gameplay since powerful combos can be more easily parried. The new Recovery System enables players to recover health during battle allowing players the ability to recover in battle.

Additionally, Dynasty Warriors: Gundam 3 brings a new strategy facet to gameplay. Battlefields now incorporate multiple facilities with various functions. Capturing these locations will change the battlefield conditions and turn the tide of the battle in your favor. Furthermore, players can take their favorite Mobile Suits and engage others in head-to-head action in online versus mode and up to 4 player online multiplayer campaign mode