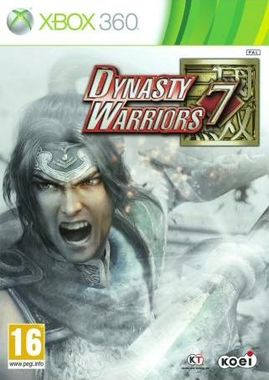 The Rise of the Jin Dynasty!
In the new Story Mode, follow the ascent and fall of heroes.

In Dynasty Warriors 7, experience a new Story Mode and follow the captivating story of four Kingdoms battling for rule of China. Experience the individual tales of the Shu, Wu, Wei and the new Jin kingdoms as they shape China from the warring chaos at the end of the Later Han period to the division of the Land into Three Kingdoms. Take your faction through this key point in history and tell the story of the Dynasty that rose to seize power and unify the country once again.

Immerse yourself in the epic scale of each Kingdom's story, viewing events from the eyes of a different character in each new stage.

A truly cinematic experience where battles and tales blend together seamlessly!
The story mode has been upgraded to provide seamless transitions between cinematic sequences and gameplay. Imagine a scene where a character is charging down a hill and into enemy position, and right as he reaches the enemy line the player regains control of the character and the battle begins. This merging of story and game play allows the tension and excitement of the story events to spill over into the battles that follow.


The greatest number of playable characters yet!
Take control of the next generation of Heroes to charge the field!

Numerous new characters appear in this story starting with Sima Shi and Sima Zhao, the sons of Sima Yi who laid the foundation for the rise of Jin, in addition to other heroes who were active during the battles at the end of the Three Kingdoms period. And all of your former favorite characters have been given an exciting new look in this game, so even fan favorites will feel like new friends.

The most robust character roster in the series helps to bring the bright and exciting world of Dynasty Warriors 7 to life.


A new weapon system allows characters to equip any type of weapon!
Now you can use two weapons to perform exciting new attack combinations!

Characters now carry a variety of weapons into battle including spears, swords, maces, and others. Weapons can be switched during battles.

While only two different weapons can be equipped at once, switching between the two will be simultaneous. Switching weapons also releases a powerful ""Switch Attack"" that has varying special effects depending on weapon type. This amount of variety allows players to create their own play style through their unique choice of weapons.

Weapons can even be changed in the middle of an attack sequence, allowing players to string together new types of combinations. Players can even change weapons while they're being attacked, resulting in some amazing counterattack moves."

Your strongest weapon - truth, loyalty and friendship!
In Conquest Mode you enter the chaos of war as a single officer, fighting your way across the war-torn land in numerous battles.

But not only are you fighting through battles that portray various scenarios from the Three Kingdoms story; you can also visit vibrant cities strewn across the land. Here you can create or purchase new weapons and interact with other Dynasty characters. As you continually interact with these characters in towns or on battlefields, even more characters will become available for you to play. And joining certain forces will open up new stages for you to play, in addition to providing many more benefits that you'll have to see for yourself!