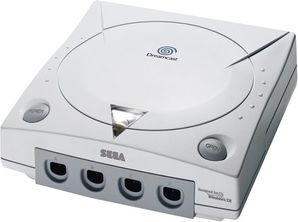 The Dreamcast – it's thinking

With the inclusion of Windows CE, Dreamcast brought the benefits of an advanced Windows-based development environment to the world of console game development for the first time. Using Windows CE, developers were able to create cross-platform titles more efficiently by taking advantage of well-established Win32 and DirectX APIs that were source code-compatible with the Windows operating system on the PC. Incorporation of DirectX also allowed the Dreamcast system to capitalise on the momentum toward PC gaming and the ever-increasing body of developers creating games for the Windows platform.

An additional benefit of the new software platform was the key services provided by the operating system and DirectX-based game libraries, including support for input devices, sound, 3D graphics, and memory and CD file management. Support in Windows CE for standard internet protocols, Winsock, and the DirectPlay API allowed developers to take advantage of the Dreamcast system's modem capabilities. In addition, the modular architecture of Windows CE meant operating system components and DirectX-based services could be eliminated if not required, or replaced by the developer's own custom libraries.

The result of the Windows PC-based game development was a collection of top-quality franchise favourites, new titles, and arcade ports. Sega's flagship mascot made the jump to next-generation in style with Sonic Adventure, the console's best-selling game, popular arcade game Crazy Taxi received its first home console release on the Dreamcast, while the popular Tony Hawk's Pro Skater 2 saw one of its best ports on the console. Fighting games like Marvel vs. Capcom 2: New Age of Heroes and SoulCalibur were received well by fans, sports enthusiasts were treated to releases like NBA 2K1 and Virtua Tennis, and the Dreamcast even spawned a couple of new gems including the unique Jet Set Radio and the critically acclaimed RPG Skies of Arcadia.

The controller and VM

The Dreamcast controller was truly unique, featuring a slot on the front for the Visual Memory (VM) unit. While it primarily served as a removable storage unit for saved game data, the VM could also function as an auxiliary display during gameplay, and even sometimes as its own bespoke handheld device. Features of the VM included a small black and white screen, speaker, directional pad, and four buttons. It also had the ability to download additional games. Titles like Jet Set Radio and Quake III Arena included VM-based minigames, while the unit provided additional in-game features in releases such as Grand Theft Auto 2, Skies of Arcadia, and the NFL games.