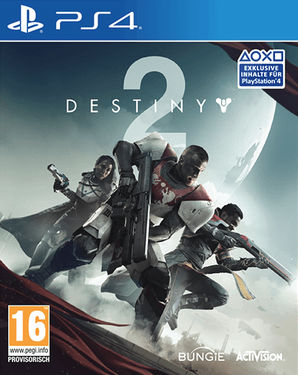 Humanity’s last safe city has fallen to an overwhelming invasion force, led by Ghaul, the imposing commander of the brutal Red Legion. He has stripped the city’s Guardians of their power, and forced the survivors to flee.

You will venture to mysterious, unexplored worlds of our solar system to discover an arsenal of weapons and devastating new combat abilities. To defeat the Red Legion and confront Ghaul, you must reunite humanity’s scattered heroes, stand together, and fight back to reclaim our home.

Destiny 2 provides an unprecedented combination of cinematic storytelling, thrilling solo adventures, and cooperative, competitive, and public gameplay — all seamlessly woven into an expansive online world. Rally your friends or venture out as a solo player. The choice is yours.

Campaign – Play Solo or with Friends.

Embark on a massive action-adventure journey to fight back against the Red Legion determined to destroy us all, and to reclaim our home, the last safe city on Earth. Players can also explore in Adventures, Patrols, Lost Sectors, Quests, and Public Events.

Form a fire team with up to 3 players and infiltrate an enemy stronghold in one of the many Strikes. Gather your fire team of 6 and take on the ultimate challenge. Take on epic bosses and overcome unique puzzles. Gain an arsenal of weapons, gear and accomplishments as you fight your way through.

Put your competitive skills to the test against the most dangerous enemy of all – other players. Intense 4v4 competitive multiplayer matches, including over 12 different PVP modes.

Dominus Ghaul commands the Cabal’s elite Red Legion, brutal soldiers who have scoured countless worlds and have never known defeat. His army now occupies our last safe city – our home – and the Red Legion show no signs of slowing their conquest.

Explore the wild frontier and gain unique items by completing small tasks found throughout the world. Along with discovering lost sectors and public events as you patrol the rich destinations.

Four New Stunning Worlds to Explore with New Features – The lush forests of the European Deadzone, the rolling oceans Titan, the strange and unstable Nessus and Io a moon of Jupiter occupied by our enemies.

Hunter – Master Of The Frontier

Quick on the trigger and deadly with a blade. Cunning and ruthless, Hunters stalk the battlefields, taking big risks for bigger rewards.

No need for a scalpel when a hammer will do the trick. Built for power and prepared for war, Titans stand tall against our countless enemies.

Warrior-scholars of the Light, a Warlock's mind is an arsenal of deadly secrets. On the battlefield, those secrets can shatter reality itself.