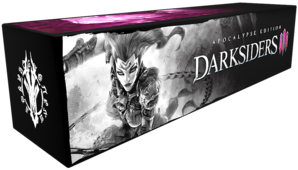 Please note: Additional in-game content provided via DLC code may not be valid/present when purchased pre-owned.

Return to an apocalyptic Earth in Darksiders III, a hack-n-slash Action Adventure where players assume the role of FURY in her quest to hunt down and dispose of the Seven Deadly Sins. The most unpredictable and enigmatic of the Four Horsemen, FURY must succeed where many have failed – to bring balance to the forces that now ravage Earth. Darksiders III is the long-anticipated, third chapter in the critically-acclaimed Darksiders franchise.

The Crucible and Keepers of the Void DLC Content Introduce New Puzzles, Weapons, Enemies and ARMOR!

The Crucible DLC Fury’s presence has been requested by a strange entity wishing to test her skills in battle. Never one to back down from a challenge, Fury accepts the invitation and gains access to a location known only as the Crucible. Here Fury will fight wave after wave of enemies, competing for a chance to unlock new rewards and items.

Keepers of the Void DLC

On a quest from Vulgrim, Fury must travel into the Serpent Holes to remove an ancient threat that resides there. The Serpent Holes are riddled with new puzzles and enemies eager to test Fury’s abilities. If Fury prevails, she will unlock all new weapon from the Hollows, as well as the biggest prize of them all: The Abyssal Armor.