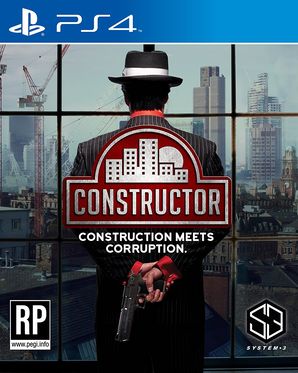 CONSTRUCTOR: The highly original 'build-em up' simulation returns to PlayStation 4 in 2017 celebrating its 20th anniversary since its first appearance.

On its original release, Constructor immediately shot to #1 in the charts, selling over 5 million units worldwide and gained a cult following that lives on today.

Take on the role of a budding property tycoon who must do battle with your competitors to create a thriving and profitable city.. in ANY way you see fit! This includes not only the speedy building of houses and factories, but also having to cope with the incessant demands of your tenants as well as keeping a whole bunch of UNDESIRABLE characters under control! This 'colourful' group of degenerates can, however, also be used against the competition with humorous and catastrophic effect!

The use of these undesirable elements is one of the core game mechanics. Whether you're terrorizing the neighbourhood with Thugs, sending a group of Hippies to picket enemy factories, letting Mr Fixit 'repair' the enemies' gas and electrics fittings, or whether you take the big decision to involve The Mob in your business, there are countless ways to help your competitors fail in a spectacular fashion!