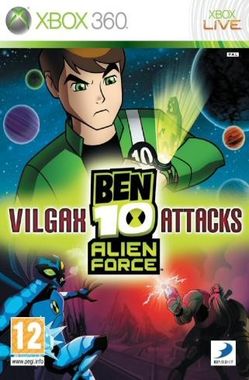 Ben 10: Alien Force - Vilgax Attacks is the latest game in the multi-million unit selling videogame franchise based on Cartoon Network's hit television series, 'Ben 10: Alien Force'. Players will experience an action packed adventure in the vast Alien Force universe as they take Ben and the Omnitrix into outer space to alien home planets for the first time ever in the series.

In an original storyline developed exclusively for the game, Ben will use ten of his alien forms - Echo Echo, Goop, Brainstorm, Chromastone, Big Chill, Humungousaur, Spidermonkey, Swampfire, Jet Ray and Cannonbolt - and their special powers to thwart his greatest enemy Vilgax from his evil scheme to conquer the universe, one planet at a time!

Players will also journey to never-before-seen planets in an upgradeable spacecraft while blasting through asteroid fields and enemy ships. Offering a solid blend of combat, puzzle-solving and platform gameplay, Ben 10: Alien Force - Vilgax Attacks will provide hours of gameplay for players of all skill levels.