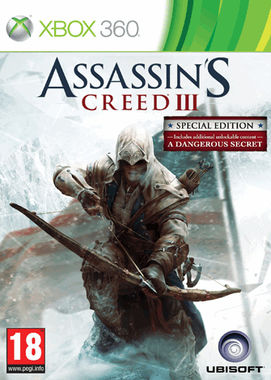 A new assassin will rise as a new country is born…

Assassin’s Creed III continues the stealth, action and open-world gameplay that is the series’ trademark, transporting the action to the American Revolution in the late 1800s. Our new Assassin is Connor Kenway – half-English, half-Native American, and taking orders from General George Washington himself…

Fight against a secret that could jeopardise the funding of the revolution. Upon completion of the mission you will be rewarded with an exclusive weapon: a Flintlock Musket.

Assassin's Creed III promises the biggest Assassin's Creed game to date. The locations are much larger than in previous games – The Frontier itself is over 1.5 times larger the Rome seen in Assassin's Creed: Brotherhood and offers greater freedom in the open-world gameplay that fans have come to expect from the series. The time-frame of the game is larger too, spanning 30 years in the life of Connor from 1753 to 1783.

The Frontier is a wide open wilderness that offers more unique challenges than ever before. From rocky cliff faces to heavy wooded areas, Connor is equally at home climbing and navigating trees and ledges as he is taking out enemies on the ground. And it's not just about stalking foes both British and Templar; this game gives you the chance to animals as well as your human prey.

City-based gameplay still plays a big part, with fantastic and densely-packed recreations of Boston and New York. On top of this, a new dynamic weather system is in place that brings real changes to the action with the changes of the seasons. When winter comes, rivers freeze bringing a change to the geography and allowing you to adapt to the terrain like never before. Enemy soldiers also adapt, becoming colder and slower and easier to pick off!

With larger-scale locations and a longer time-span, the way you execute your missions has evolved, too. New mission delivery systems like Clubs allow you to accept and carry out more than one mission at a time. With different tasks to balance and more freedom to accept missions when it suits you, Assassin's Creed III offers more control over how you play the game, and promises a more personal and layered experience.

The traditional stealth and combat returns in Assassin's Creed III, now looking and moving better than ever thanks to the new Ubisoft-AnvilNext engine. Connor is perhaps the most nimble Assassin yet, with hard –hitting combat and free-flowing parkour moves amongst the buildings, trees and everywhere else! He's not only armed with the traditional Assassin's knife, but has a trusty tomahawk with a blade shaped like the Assassin's symbol.

Naval combat makes its debut in Assassin's Creed III. For the first time, the action can take to the high seas as massive galleons blast each other apart with cannons in ship-to-ship combat. You'll have different kinds of ammo at your disposal, from traditional cannonballs to grape shot for shrapnel. Modify your cannonballs for even greater damage – chain two together for maximum impact, or set it ablaze and set your enemy on fire. Get close enough and you can even board enemy vessels for hand-to-hand combat with the opposing crew. And thanks to the new mission system, naval battles can be as big – or as small – a part of your story as you like.