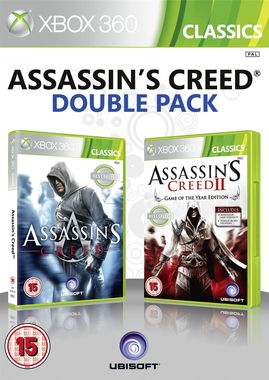 Assassin's Creed
Set in 1191 AD, when the Third Crusade was tearing the Holy Land apart. Shrouded in secrecy and feared for their ruthlessness, the Assassins intend to stop the hostilities by suppressing both sides of the conflict. Players, assuming the role of the main character Altair, will have the power to throw their immediate environment into chaos and to shape events during this pivotal moment in history. Assassin's Creed merges technology, game design, theme, and emotions into a world where you instigate chaos and become a vulnerable, yet powerful, agent of change.

Assassin's Creed 2
The highly anticipated follow-up to Assassin's Creed features a new hero, Ezio Auditore da Firenze, a young Italian noble, and a new era, the Renaissance. Assassin's Creed 2 retains the core gameplay experience that made the first opus a resounding success and features new experiences that will surprise and challenge players. Assassin's Creed 2 is an epic story of family, vengeance and conspiracy set in the pristine, yet brutal, backdrop of a Renaissance Italy. Ezio befriends Leonardo da Vinci, takes on Florence's most powerful families and ventures throughout the canals of Venice where he learns to become a master assassin.