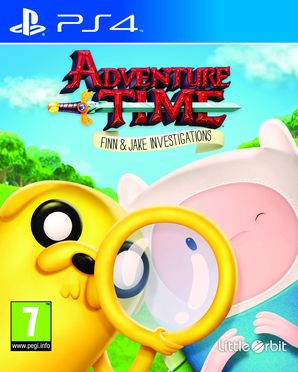 Adventure Time: Finn and Jake Investigations is the newest game based on the hit Cartoon Network series. It takes our heroes and the Land of Ooo to a whole new dimension of gameplay and visuals.

At its heart, Finn and Jake Investigations is a modern take on a classic adventure game, a genre that has seen a recent resurgence. Gameplay is based on exploring, investigating, and puzzle-solving. Through the course of the episodes, you get to interact with dozens of your favorite Adventure Time characters all over the Land of Ooo, including the Candy and Fire Kingdoms, Wizard City, and Castle Lemongrab.

And there’s a reason for all of this investigating! Joshua and Margaret — Jake’s mother and father, who also raised Finn — were seasoned detectives back in the days before becoming parents. They received their assignments from a machine called the “tickertype,” which printed out information on various cases. Now, Finn and Jake have unearthed the tickertype and decide to go into the investigation business themselves.

Rather than following a single story arc that spans the entire game, the adventure plays out as a series of separate (but related) adventures in which Finn and Jake must travel the kingdoms of Ooo in order to solve the tickertype mysteries, set around the middle of the sixth season of the show.

Investigating and puzzle-solving are the heart of the game — but, wait! There’s more!

The game’s not focused on fighting, but what would Adventure Time be if Finn couldn’t solve at least some problems with his trusty sword? Combat is fast-paced, pitting Finn against a variety of familiar foes who drop lots of collectibles and loot (as game enemies so often do). When you go back to the Tree House after each “episode,” you’ll see piles of dosh grow in Finn and Jake’s treasure room.

The depth of the story and the amount of character interaction really immerses you in the game — and the icing on the cake is the visual presentation. For the first time ever, you get to see the Land of Ooo in 3D. We have gone to great lengths to faithfully capture the art of the show as it’s never been seen before. Hey… we’re all fans of the show, too, and we’re doing it up right!