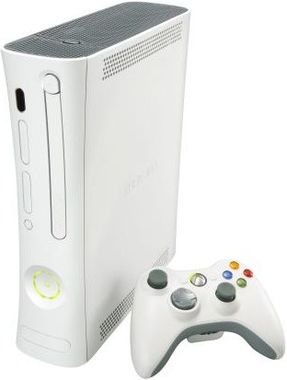 Choose from hundreds of games like LEGO Star Wars: The Complete Saga, Viva Piñata: Party Animals, and Scene It?® Light, Camera, Action and play together with family and friends. Watch your favorite DVDs and play CDs through your Xbox 360. Restrict kids' access to teen-rated and mature-rated game and DVD content with Family Settings.

• Begin playing: Xbox 360 Arcade console is everything you need to begin playing right out of the box, including Family Settings that allow parents to restrict game access for younger players. Comes with a wireless controller and a memory unit.

• Ring of Light and Xbox Guide Button: Featured on both the wireless and wired controllers, the Xbox Guide button puts you in control of your experience. In addition to bringing up the Xbox Gamer Guide and the Xbox System Guide, the Xbox Guide button lets you turn the system on and off without ever leaving the couch.
• Xbox LIVE: Xbox LIVE is where games and entertainment come alive, the only unified place where you can play with anyone, anytime, anywhere. And the best just got better. Connect Xbox 360 to your broadband connection, attach a storage device (hard drive or memory unit) and get instant access to Xbox LIVE Silver. Express your digital identity through your gamertag and gamer card, talk with others using voice chat, and access Xbox LIVE Marketplace.
• Xbox LIVE Marketplace: Keep your favorite games fresh with instant access to new content. Accessible to Silver and Gold members, Xbox LIVE Marketplace lets you personalize and extend your experience, on demand.
• Games:Xbox 360 redefines what games look like, sound like, feel like, and play like to engage you like never before. Every Xbox 360 title supports 720p and 1080i high definition resolution or 480p standard definition resolution, in 16:9 widescreen, with anti-aliasing so you enjoy smooth, movie-like graphics and multi-channel surround sound. Vibrant characters display depth of emotion to evoke more dramatic responses, immersing you in the experience.
• Digital entertainment: Amplify your music, photos, video, and TV. Watch progressive-scan DVD movies right out of the box. Rip music to the Xbox 360 hard drive (256MB internal storage) and share your latest digital pictures with friends. Make the connection, and Xbox 360 instantly streams the digital media stored on your MP3 player, digital camera, Media Center PC, or any Microsoft® Windows® XP 2005 Edition-based PC.