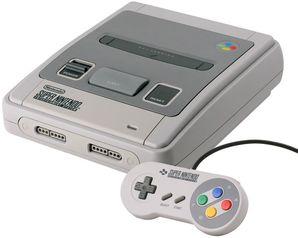 The Super Nintendo's built-in DSP (digital signal processor) performs complicated calculations on in-game images in the blink of an eye. This is responsible for 'Mode 7', the ability to take hefty 2D shapes and twist and spin them through three dimensions, allowing games like Super Mario Kart to create pseudo-3D tracks. In the face-flappingly fast F-Zero, this is done at speeds that made even the bravest gamer tremble.

Some of Nintendo's biggest arcade and NES characters return in blistering style on the Super Nintendo. Super Mario World, The Legend of Zelda: A Link to the Past, Donkey Kong Country, Super Metroid, Super Mario Kart – all are regarded as the some of the finest games in their genres to this day. Third parties have helped raise the Super Nintendo's total catalogue of games to over 500.